Designing a better 3PDT Daugther board


Every pedal builder knows of the 3PDT stomp switch. It's pretty much the staple for true bypass effects. 3 Poles and 2 Throws. 2 of the poles are used for bypassing the effect and one of the poles for the indication LED. I'm not going to go into bypass methods as that's another whole rant. Many of the big name companies use them as well as most of the "boutique" (hate that word) pedal builders and most of the DIY home builder folks like myself. There are good ones and bad ones and in between ones. Usually you get what you pay for.
These switches are great..........but hand wiring them can be a drag and take up valuable time. Also on the cheaper ones if you have the iron on too hot and for too long you can melt the epoxy holding the switch contacts and basically ruin the switch. I'm all about making it easy for myself finding ways to improve my methods and speed stuff up. Heck in the last 4 months I made 105 pedals and this isn't my full time job. To make it easier and faster to solder up these guys some clever people have developed 3PDT daughter boards. For years I didn't use them, then one day I got some on a whim. I was forever sold on using them. Such a great time saver. There are now many pedal PCB shops that sell these little boards, delyk, Fuzz Dog, GuitarPCB to name a few.

A year or so ago I was just learning how to panalize in EAGLE and thought these would be a good starting point to make up some panels. Since then I have gotten about 400 or so 3PDT boards made up and I have been using them since them with great success.

I was having a think one day and decided to make a utility version of the beloved 3PDT daughter board. One that could be used for more than just bypass. Say for instance you have a pedal that you want to have 2 x gain settings on and a bypass on foot switches. I would have had to hand wire the gain pots to the switch and the bypass on a daughter board. Until now...


First of all I had to draw up the schematic. It has my Interlink part as previously seen in the blog. Also I had to make a special SMD part up for a bridging pad. Two small SMD pads with a 0.3mm gap between them so a blob of solder makes the connection. I just took a part from the sparkfun library and modified it to suit.


Once in schematic form I switched to the board and routed it. I like to keep nice big fat traces on the audio path and V+ rail where I can.

Why is this a better 3PDT board than others?

Because you can use it for True bypass OR as a DPDT switch with 2 x LED indication. And here is how.

Setting it up for bypass is easy. Just chuck a big blob of solder on the two pads circled in the picture below. The bottom pad joins poles A and B together for the bypass part of the bypass. The top pads join the bypassed input signal of the effect to ground. I do it this way to ground the effect when not in use. for the LED in the configuration use the two pads that are circled at the top right of the board. The CLR and a Power Protection Diode are also installed on the board

Setting up to use a switch is also very easy. Just don't bridge the pads. You can see in the picture below which pads the contacts of the switch end up on. This time and Dual colour LED can be hooked up to the three LED pads and indicate either switch state


So with that one done and dusted I thought why stop there. There have been a few pedals around with these new LED ringed 3PDT switches. They have a built in LED ring that lights up. They look quite good. I haven't used them on any of my builds but a fellow builder has. I was designing PCBs for this guy and thought hey why not do some daughter boards that you can use with these switches. So I did. 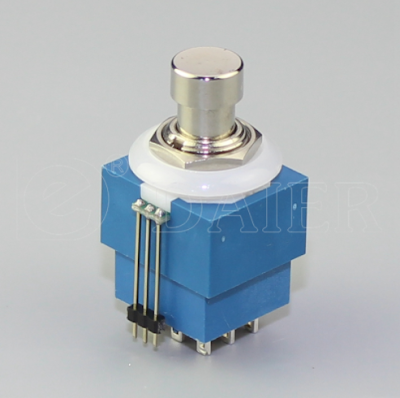 Just like above they are setup the same. Bridge the pads for bypass with the exception of a 3 way pad to wire to the LED
With the PCBs all drawn up I then put as many as I could onto a 100mm x 100mm panel.

My method of panalizing is probably the slowest but it works for me. What I do is make a copy of the .BRD file into another folder which severes the connection between schematic and board. I then draw 1.016mm or 40mil line on the milling layer for a milling cut. I also made a custom part of a row of 7 0.5mm hole to make the mouse bites. Once I'm happy with the milling lines and mouse bites on one of the boards I select the whole lot and copy it, Then I paste a copy and line it up with the original. Rinse and repeat to fill a 100mm x 100mm panel. I process the board in the CAM processor and then have a look at the gerber file. Adjust anything that needs adjusted and reprocess. You'll notice in the below screen capture of the board there are a mix of PCBs. 10 x 3PDT 2 x Miniature 3PDT and 4 x LED ring 3PDT . I'm going to do a post on how I panalize at some stage in the future. The boards are currently in production at DirtyPCBS

For anyone that is interested here is a dropbox link to my switch library  PP-Switches
Here is what they look like in EAGLE. The outline is in the "TEST" layer so they don't appear on your processed Gerber 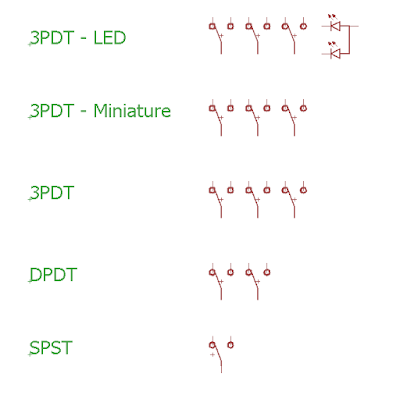 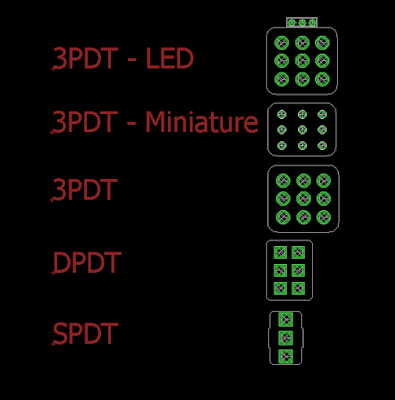 I love messing around with HM-2s. This is a super simple mod and very useful. Adding a clean blend to the mighty HM-2

I have done this enough times to have a modified schematic drawing with where to add/cut stuff in.

First thing to do is open up the pedal and move the wires around and drill a hole for the pot. I use a 9mm pot as there isn't much room in there.
Now I take my 9mm pot and put some 80mm (approx.) fly leads on it and then mount it into the hole, put the nut and washer on and tighten.
Next I build up my little blend PCB. I have designed a PCB for adding to any circuit to add a clean blend. As long as they are in phase it works great for only a handful of components. I don't sell this PCB it's just for me. Alternately if you want to do this mod you can use this. It's a vero layout of the same circuit I have made a PCB of. I'm not taking credit for the circuit it's not mine. I do however use a 100N cap instead of a 10N as I found it sounds better.
So now with my PCB made and the 9mm blend pot installed all I need to do is wire it into the HM-2. To do this I need to cut 1 track on the HM-2 PCB. This track is after the volume but before the FET bypass switching system (as labelled on the schematic above).

Now with the trace cut I can start soldering wires onto the main PCB. Two wires from the 9mm Blend pot, Pin 3 and Pin 2 go onto where the cut trace is. Pin 3 goes to Pad #8 and Pin 2 goes to the other side of the cut trace which connects to C32. 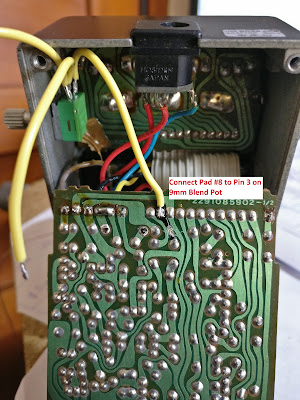 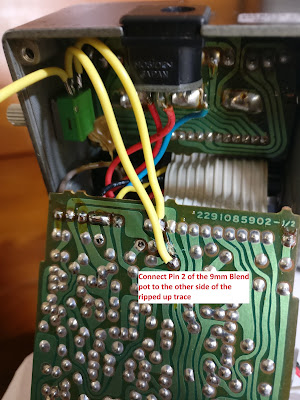 
With everything now soldered in it;s time to test the mod. Tested it with no issues. Now I need to secure the daughter board with a bit of the old hot snot glue, attach a knob to the pot, put it all back together and send it off the customer.

So that's how you mod an HM-2 to have a blend control. This is a pretty easy mod to do even for a beginner. If you have any questions or comments add them below