This is the schematic that I drew up after tracing out the GUMA PCB. Now adjusted and verified.
All my bits came in last week and I verified my Darkglass B3K clone PCBs. At first it sounded a bit rubbishy, muddy. I realised I had put in a 10nF cap where there should have been a 1nF cap. Desoldered the cap and soldered in a new one (onto the back of the board as it was easier). The other thing is that it needs a jumper on the 100R resistor as it's in the wrong place. I then did an A/B test with the other clone I had built (GUMA drive). Sounded very very close. At the time of testing I was using 2N5458 FETs instead of the J201 FETs (now like unicorn dicks). Next step is to try and replicate the tonestack of the b7k.

So I've been putting it off for a long time but I've finally gotten round to doing some more work on my new second generation loop selector. This time I've gone for 6 channels (PCB supports 8) as that is about the maximum I can comfortably cram into a 1032L enclosure.

I drew up the schematic and board in EAGLE quite some time ago. It uses an Arduino Nano which is mounted on the PCB. For the Loops I have used A5W-K relays for true bypass. These are switched by a ULN2803 driver chip which is controlled from a 74HC595N Shift register IC. The LEDs are controlled by a 16 channel PWM LED driver a TLC5940. Any spare pins I had on the Arduino I used for inputs from the foot switches. I have since changed my design and my future version will just use 74HC595N ICs so I can use more pins for more inputs a the TLC5940 takes up 5 pins.

I managed to fit all the components and 6/8 relays on the PCB which measures 100mm x 41mm
I then panalized this layout to get 2 boards on a 100mm x 100mm panel. I ordered the PCBs through DirtyPCBs and I was very happy with turnaround time and outcome. Highly recommend using them. I've just done a huge order of 450+ PCBs and they have just landed in the country. I'll do another blogpost explaining how I used panalization to get some many boards onto 1 panel after they arrive in.
I proceeded to part the board out and make a few testing rigs for programming and testing functionality 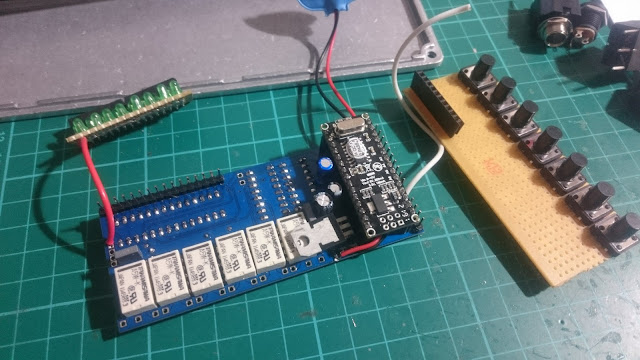 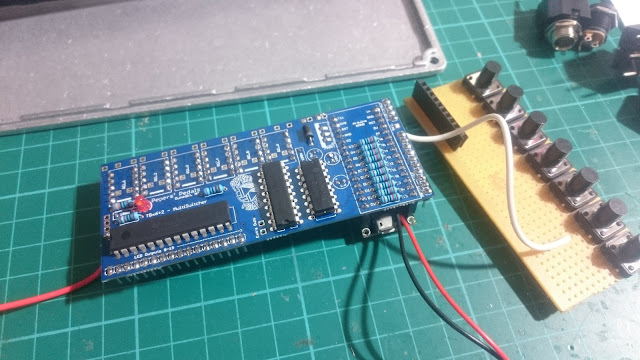 Now that the boards were ready I had to write the Arduino sketch. I'm super novice at this but luckily I have a friend that can do this stuff in his sleep. So I did as much as I could and only asked him if I was desperate. I ended up using a bunch of great libraries to help me with my sketch.
The One-Button Library. The Shifter Library. The TLC5940 Library. Without these I would have been lost. I have the sketch at a stage where I'm almost happy with it.

Here is a little video of the operation.

Needs some work but It's ready to box and refine. So now to the box. 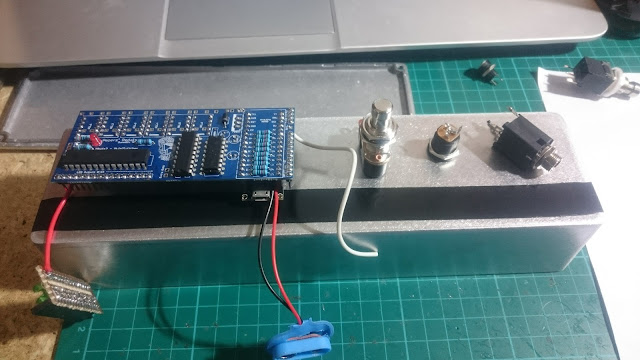 I think everything will fit well. So I decided to head over to TinkerCAD and make up a 3d model to see if it all fits. 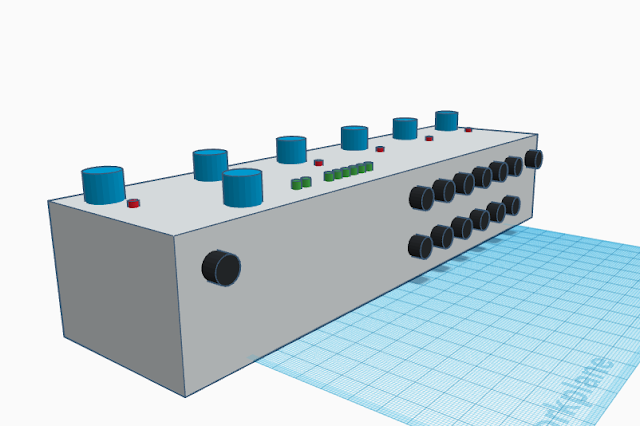 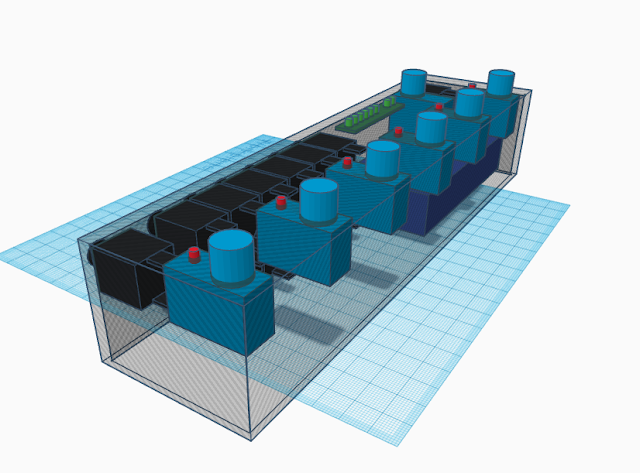 Looks like it all fits and off to making a drilling template. Drill, Powdercoat, Decals, Clear, Assemble